In the morning, we awoke to our first assignment on the AMPION Venture Bus; come up to the front of the bus and introduce yourself and your venture idea. As you can imagine, with over 40 participants on the AMPION Venture Bus, this was going to be a long process. However, the universe seemed to align in such a way that we were able to quickly get through half of the bus before we made our first stop; The Zimbabwe Immigration Office.

For several hours, we found ourselves at the Zimbabwe Immigration Offices preparing to enter Botswana.

Now for your typical group of 40 individuals, this would have been a great experiment in patience considering the presence of the African sun. However, for the AMPIONeers, it was a moment to mingle with their colleagues over Red Bull and Coke. Nevertheless, after a little finessing, we found ourselves back on the road towards the border and at the Botswana Immigration Offices.

Image. A warning sign concerning “Foot and Mouth Disease” at Botswana Immigration Office
In comparison to our encounter with the Zimbabwe Immigration Office, in Botswana, we were required to sanitize our footwear as well as our vehicle (the lovely AMPION Bus) in order to prevent the spread of “Foot and Mouth Disease”, a disease that seems to be spread from a person’s feet (or shoe-wear). When I say all of our shoes, I mean even the shoes packed away in our suitcases that had not even touched African soil had to be sanitized. Even though it was an unusual immigration process for some of us international travelers, one must appreciate the attention to detail paid to the migration of diseases between borders.

A few more questions and our team was officially cleared to enter Botswana.

As we traveled through Botswana, we tried to make up for the time we lost on the Zimbabwe-Botswana Border. However, we first had to grab something to eat. After all, we had been at the mercy of the Immigration Offices for several hours and only had caffeinated liquids to fill our bellies. Hence, we stopped at a local WIMPY and SPAR Market along the way and had a (2) hour break to fill our bellies as well as find team members for our AMPION ventures. Full and satisfied, we re-boarded the bus in hopes of arriving in Gaborone before nightfall in order to meet our Botswana colleagues for dinner.

In the meantime, we met with our new group members and began to brainstorm around our ideas to pitch the following day in Gaborone.

We began to place Post-It Notes on the windows and discussing our ideas for possible ventures when we noticed one of our peers on the side of the road…outside of the bus.
We were all shocked to discover that we had left behind one of our colleagues at the SPAR Market earlier. Upon this realization, we quickly made a U-turn and picked up our fallen comrade. Luckily everyone was in good spirits about the mistake, even our fellow AMPIONeer who had to travel a significant distance to catch up with the AMPION VentureBus.

Image: Our first meal in Gaborone, Botswana, courtesy of MoroGroup.

A few short hours later, as night began to fall, we found ourselves in Gaborone, Botswana, just in time to meet our colleagues from the innovation and entrepreneurship community in the area. MoroGroup proudly welcomed us to Gaborone and provided us with a fantastic feast for some hungry travelers. For the first time, I was able to try the Botswana version of gravy and cornmeal, which are considered staples of our diets in my native home of the southern United States. Reluctantly, I have to give the award to the Botswana Chef, everything was delicious and not a grain of rice was left on my plate.
Soon, we had to say good-bye to our new Botswana colleagues and proceed to our overnight accommodations in order to get a much needed shower and rest…in a bed.

One thought on “SOUTHERN AFRICA TOUR – DAY 01: JOURNEY TO BOTSWANA” 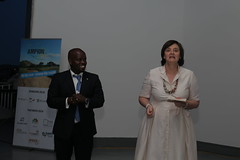 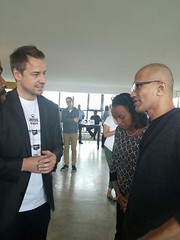 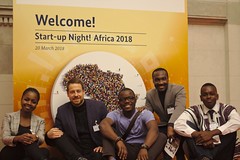 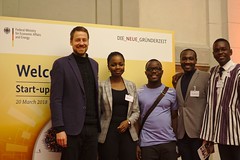 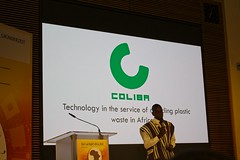 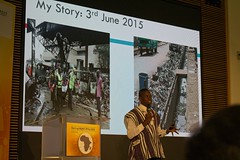 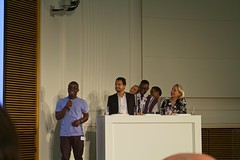 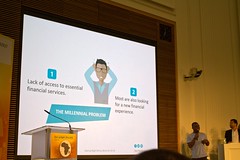 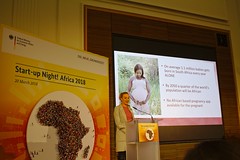